Handrailing Along the Teton Crest 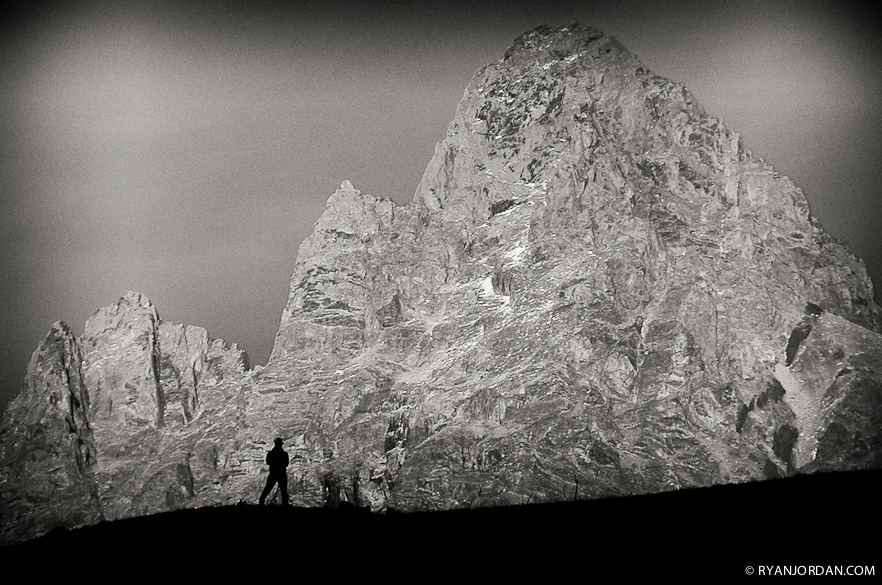 Handrails are substantial geographic features that can be used for navigation.

You might follow a stream, or a fence line, or a ridge. These are all types of handrails.

My two favorite wilderness handrails are both about “a 5 days’ walk” in length: The Wulik River in the Alaskan Arctic, and the Teton Crest in Wyoming.

The Teton Crest is about 45 miles from end to end as the crow flies from the Ashton-Flagg Ranch Road to Highway 22 at Teton Pass. Most routes between these two points will travel about 65 miles if trails are mostly followed, like the Petzoldt High Route, which is not really a high route because it’s almost all on trails that travel benches well below the crest and makes forays into valleys that don’t feel so high. Don’t fret too much, though, because it’s still a good, and scenic, route, and suitable for intermediate trekkers who can navigate the trailless Class 2-ish section between Table Mountain and Hurricane Pass. The rest of the route is easy, except for the steep climb at Dead Horse Pass if the weather is hot.

I’ve traversed a variety of routes parallel to the Crest on both foot and ski, but haven’t done a walking trek there since 2002, when I went in via Leigh Canyon with Glen Van Peski and Alan Dixon. We came out at Death Canyon after attempting a pure route along the crest with helmets that didn’t go because the rock was too rotten. It was still really fun.

My last full walking traverse without helmets and intentionally scary parts was in 2001.

Here’s how it all shook out.

Ken and Don exited somewhere up in the NW end of the range, I think it was via Hidden Corral Basin. Todd made over a few of the big passes and came out somewhere in the vicinity of Teton Canyon, also on the West side, after getting all bloodied up bushwhacking his way out. Todd, Ken, and Don had long cab rides back to Jackson Hole.

Glen, Photon, Jim, and I met John O, Caboose, and Steve somewhere South of Red Mountain for a night, where I got a seed husk stuck in my throat and had to extract it myself after John O’s failed attempt to do so with a Snow Peak Titanium Spork. I then gave John O, Caboose, and Steve good data – GPS waypoints – to help them navigate from Green Lakes Basin over Littles Peak and along the Crest to Hurricane Pass, where the rest of were going to meet them, but they never turned on their GPS, got disoriented, and exited much later than the rest of us via a nighttime walk out of Cascade Canyon after a harrowing descent from the Crest and a bit of wandering up in the complex terrain up there.

I don’t recall how Jim, John O, Caboose, and Steve got back to Jackson but by now I’m betting that the cabbies are picking up on all this – there just aren’t that many in Jackson.

I split from Glen, Photon, and Jim for a night while I snuck down Cascade Canyon to get some sunset photos of the west faces of the Tetons, then rejoined them at Hurricane Pass.

Jim left us early because of a bad knee, and he was going to opt for the ride down the Gondola at Rendezvous Mountain, save for the fact that he missed the last day of Big Red by 24 hours. It was closed for the season. So he enjoyed the banging descent down the ski hill road.

Glen, Photon, and I finally made it to Phillips Pass and down to Highway 22 to seal the deal on the whole traverse of the Crest.

This wasn’t really the intention.

So next week, I’m headed back to the Crest to attempt an expedition style (no, that doesn’t mean heavy, or with porters, or with resupplies, etc.) traverse in a more pure sort of form.

To complete a N->S traverse of the Teton Range from the Ashton-Flagg Ranch Road to Highway 22 along the Teton Crest (hydrologic divide), in the following style:

I’m really excited about this trek, and the maps are pure, and beautiful. I think the trek will have a Shackleton-esque / Meriwether Lewisy type feel to it, and I think it will be hard.

I made custom maps for this trek and removed anything manmade, except a handful of place names. There are no trails, no roads, no land boundaries (although we know that GTNP is on the East side of the Crest, mostly), no benchmarks, no elevation data, no campsites, no bear poles/boxes, no coordinate grid.

Just a pure, unadultered, topographic interpretation of the terrain, with a few place names thrown in for landmarks. 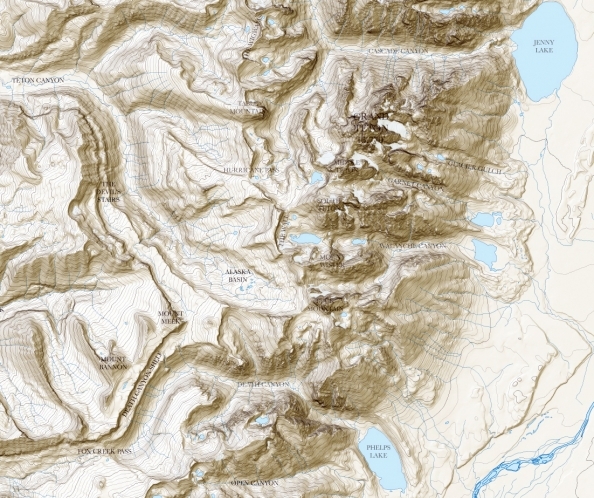 The map alone promises that this will be an adventure.

There will be six of us in the party (Damien, Doug, John, Pat, Eric, and me), and I’ll take a camera.

You can follow us via SPOT or Twitter via Satellite phone between Sunday, September 26 and Saturday, October 2.