Jorden Lake is perched near the western terminus of the Beartooth High Lakes Trail, which you’d infer to be popular simply because the trail is named on the old USGS maps.

In July, I walked the High Lakes Trail west from Island Lake and saw only 9 people, 6 of which were day hikers near its eastern terminus.

In late August, I walked the High Lakes Trail and saw another 6 day hikers near Island Lake, and only 3 other parties of backpackers.

So it was not a great surprise to find out that we’d have one of the Beartooth’s most spectacular lakes all to ourselves when we arrived.

Jorden is a neat lake. Superb scenery, remoteness, and an outstanding cutthroat trout fishery means that it’s worth being a destination. 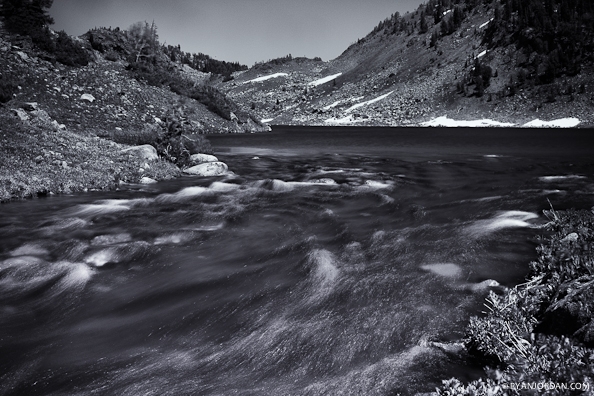 However, on my trip in late August, it was only a stopping point.

We arrived late in the evening to calm skies and rising trout, and I remember the evening well: a pleasant breeze, a bright moon, a small campfire, grilled trout, a mule doe, and crawling into a dry sleeping bag on a crisp, starry night. 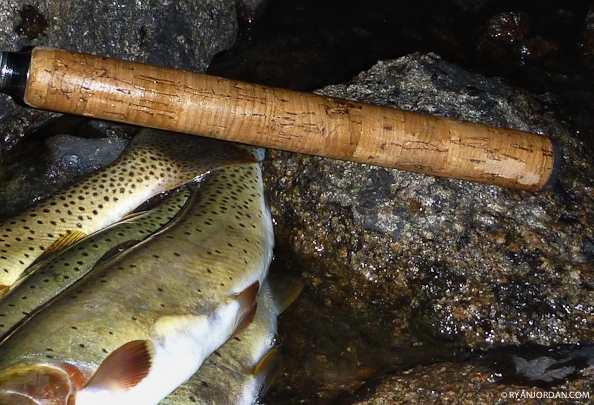 Jorden Lake cutthroat, caught with a Tenkara Hane rod after dark, during a stonefly hatch on Farley Creek, August 2010. We grilled these trout over fire using the 1-oz Zia Titanium grill. PANASONIC TS-1.

We woke up to something different.

Our morning fire was to be a functional one: for cooking a hot meal, and warming up extremely numb fingers. 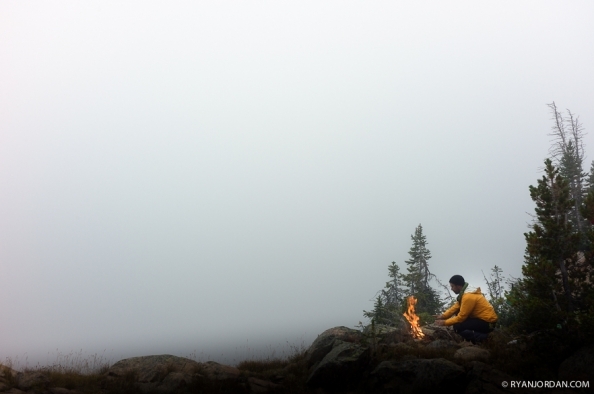 This day, too, was to be a special one, marking the beginning of our three-day, six-mile descent of the Farley Creek canyon in conditions that could be described as being on the wrong side of pleasant.

It was one of my most memorable, and rewarding, three day treks ever.

The photo above tells only the beginning of that story, and I like its composition for its simplicity. I can feel the magic warmth that fire gave to me, and boy oh boy, did I like it. That, and knowing that behind the fog, lies one of the most beautiful blue lakes in the Beartooth Range. I felt strange when I took this photo (self-portrait, from a tripod): like it was just me, and the fire, and a few scrappy trees, and then – nothingness. It’s a weird feeling, being engulfed in mountain fog this thick – me and the fire. The fire and me. Me and the fire… (I’ve felt this weird fog-feeling only a few times before. Once was when I was caught in a dreary rainstorm on the Valhalla Traverse en route to climb the Black Ice Couloir in the Tetons. I was bivied on a desperate ledge, soaking wet, and there was nothing but fog around me – just me, the bivy, and a lot of dangerous exposure, and no fire.)

I’ve passed Jorden lake a dozen times before, but this time, because it marked the beginning of something special, it’s forever cemented into my memory as one of my favorite spots. If you ever have the chance, go to Jorden Lake …

… and then take a dive down the Farley Creek canyon for an adventure into the unknown, but beautiful, bowels of the Beartooth Range.