I awoke again early (but no alarm this time) to sunrise alpenglow on the peaks surrounding our camp. I lazily shoved my camera out my tent and randomly snapped a few uncomposed photographs, and then went back to sleep.

The sun’s warmth once again woke me up so I threw my quilt to the side, stripped my down jacket off, and started a brew.

With Mount Ritter high above us, I reflected on its first ascent. Fittingly perhaps, since Ritter may be the Sierras’ most dominant peak, it was climbed by John Muir in 1872. During that weeklong trip, he was reportedly carrying little more than “a blanket, biscuits, and tea.” I feel a little ashamed that I’m carrying much more than a blanket, biscuits, and tea! But today we will have the opportunity to stash some gear we won’t be needing for the next several days, so we’ll see how much I can pare down.

I spent the morning journaling and recording some notes about the gear and supplies I packed for this trip, with the optimistic hope that I will refer to them again so that positive changes can be made.

In contrast to Minaret Lake, the animal sounds here are noticeably absent. There are no birds chirping, squirrels chattering, or marmots whistling. The only sounds are the gales howling through the Minarets above, and the background hissing of a small waterfall descending the cliffs separating our camp from the tundra bench above.

This morning’s breakfast was a new recipe for me: tsampa with chopped pecans, coconut flakes, dehydrated currants, and dry whole milk. As a hot cereal with a little brown sugar added, it’s an exceptionally good morning meal and kept me satisfied until noon.

We left our camp and climbed through a forest of large, old hemlocks on a faint path to the tundra beneath the Ritter-Banner col. A giant ribbon of water cascaded down from the remnant glacier adorning Mount Ritter’s northeast aspect, falling several hundred feet through black cliffs, disappearing in the talus below.

Our route meandered upward through talus and tundra to a small pass overlooking the barren landscape housing the starkly beautiful blue waters of the Nydiver Lakes. After a stop to drink, snack, and rest, we began our ascent to Whitebark Pass via a diagonal traverse upward towards the pass’s namesake stands of whitebark pines.

The highest of these pines, situated only a few dozen vertical meters below the pass itself, is an old denizen with a tangled mass of divergent trunks and a clear pattern to the orientation of its branches and vegetation indicative of the incessant winds at this col. Upon our arrival, the breeze was stiff enough to motivate us onward.

The descent from the pass involved loose scree and steep talus – blocks large enough to inspire a false sense of security because they are small enough to roll topsy-turvy, taking your ankle with you. We completed the descent, which involves a few Class 2 moves, with only one slip-and-slide with little more collateral damage than a broken trekking pole and perhaps a slightly bruised ego.

On the way down to the meadows above Garnet Lake, we met the Frog Man.

The Frog Man is a California Department of Fish and Game biologist who travels through the high country for a living. He carried a frog net on the outside of his pack, and seems, as best as I can gather, to dip it into ponds here and there to see if he can capture some rare hopping Sierra amphib with a yellow tummy.

After we exchanged Good Lucks and parted ways, Chase and I looked at each other, and exchanged the knowing glances, nods, and smiles that reflected our synchronous thoughts: “We want THAT job!”

Above Garnet Lake, we stopped to cache gear and supplies that we’d plan to pick up in six days on our way back to Mammoth. It reminded me of the ritual often observed at Neel’s Gap, Georgia, the first major resupply point for northbound thru-hikers of the Appalachian Trail: jettison as much as you can, and all of what hasn’t been used, to save weight. We did exactly that, saving several pounds off our pack weights. It felt good to be hiking with a pack that I could lift up with one arm.

We reached the upper end of the aptly-named Thousand Island Lake and found a respectable camp nestled amongst the scrub pines that inhabit one of the larger of the islands. Low water levels allowed us to cross a high and dry shale bridge to the island, and it feels exotic to be surrounded on all sides by water!

We tucked into a tiny bay beach to escape the gusty winds for our dinner time meal, when Chase discovered that his spork was AWOL. I took this as an opportunity to be a Hero Dad so I whittled him a tri-pronged fork from a willow branch – a real work of art I might add. He was not amused. “It tastes funny,” he said. The kids these days, I tell ya. Not appreciating my servanthood, he invoked higher powers: “Dear God, where is my lost spork?” The light bulb went off, he hurriedly scampered to his tent, rummaged around, and emerged with his long lost friend, apparently misplaced in a moment of absentmindedness this morning. The cut willow was this relegated to a life of decay and uselessness.

The wind is gusty here but the view of Banner Peak, the vast size of Thousand Island Lake, and the waves lapping the shore give an otherworldly feel to this location, one of our best camps so far.

As we close our third day, we feel our bodies and spirits synchronizing with the natural rhythms around us. Wilderness living is becoming the new routine, and we’re glad to finally be on island time.

Tomorrow, we cross the Sierra Crest. 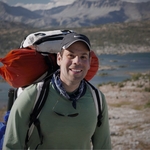 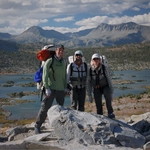 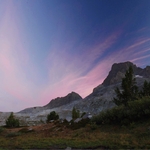 ← Day 2: In the Shadow of the Minarets
Day 4: Sabbath Layover in the Ritter Lakes Basin →