Day 2: In the Shadow of the Minarets

I awoke to a light breeze whistling its tune across the peak of my little pyramid shelter sometime in the middle of the night. I peeked out the open roof created by having both doors rolled open and saw a zillion stars along with the creamy smudge of our galaxy in the sky. Content to hear the wind and the little brook dripping near my bed, I dozed back off into my Sierra neverland.

Some time later I heard a sound that one might hear if they pitched the tent at the end of an airport runway: the jet-like howl of a west wind powering its way through the narrow notches of the Minaret crest. Moments later the gale buffeted my pyramid tarp. I stumbled out of my cozy down quilt, reset two stakes, crawled back inside, zipped the doors shut, and burrowed back in.

I set my watch alarm for a too-early time so I could photograph the morning alpenglow on the eastern faces of the Minarets. It was worth it. The matamorphosed volcanic rock of the Minarets reflects a uniquely complex suite of rusty alpenglow hues quite unlike the granite and limestone alpenglow I’m used to in the northern Rockies.

After a brief photo session from the top of a talus gully above my camp, I scrambled back down and returned to bed.

I awoke to a dream.

In my dream a friendly Yosemite black bear was shining a thousand-lumen light into my eyes, crunching on pilot crackers that he had stolen from me, and politely asked me if he could borrow a coin to unlock the bolts on my bear canister to retrieve another serving of biscuits.

I sat up in a panic. The thousand lumen light ended up being the blinding sun to the east and the crunching sound came from Chase’s footsteps circling my tarp. “Hello?” I asked, still a bit confused and wondering where I had placed my coin. An enthusiastic “Good morning!” reply from somebody I recognized snapped me back into a more peaceful reality.

My morning routine on lower-mileage trips like this is rigid, and starts with brewing a pot of coffee on my Jetboil stove while remaining in my sleeping bag. Once the first cup has allowed my mind to fully synchronize its perceptions with what is being delivered to me by my natural surroundings, I’ll ease out of my bag and sit in my camp chair outside my tarp to begin a journaling session.

This morning, warm temperatures and a remote location gave me the glorious opportunity to enjoy writing in the sun while sitting only in my skivvies, bandana, and sunglasses. A can of PBR and some street traffic might have given the scene a full on front-porch-redneck-quality to it, a thought that made me giggle a little as I felt the sun warm my near naked body.

As the day warmed, the local bird life shouted an asynchronous and unconducted symphony of squaks, chirps, and shrills, joined by the chatter of squirrels and whistles of marmots. I’m thankful they didn’t start this cacaphony at 4 AM!

A pine marten joined us during the breakfast hour on the lakeshore. It brought a mouse for its meal, but didn’t share. As cute as these creatures are, its tearing of the sinewy rodent with its sharp teeth, and its blood-stained whiskers, are a reminder that nature’s social customs are different than ours. I vow to eat a trout with only my fingers and teeth at some point on the trip. I’ll keep you posted.

After a leisurely morning spent decompressing, we left Minaret Lake very late and made our way up the talus and tundra towards Cecile Lake on one of the most scenic and popular cross-country routes in all of the Sierra: the Minaret-to-Ediza traverse.

The crux pitch comes just a few hundred feet above Minaret Lake: an infamous “slot” that requires a Class 3 climb on sparse but stable holds up a nearly vertical rock wall. Climbing it with 50 pound packs that threatened to pull us backwards as we looked up for the next set of holds gave us some trepidation, but Chase and I scrambled up, fully loaded, without incident. Dan opted to leave his pack at the bottom and climbed the slot unweighted. I climbed back down and retrieved his behemoth McHale P&G SARC and brought it up to him. I was thankful to have been wearing approach shoes (Scarpa Zen) instead of trail runners, which made climbing secure.

We traversed along the shore of Cecile Lake, right underneath the Minarets, now close enough to appreciate their mass and to have to crane my neck dramatically to bring their summits into my field of vision.

We met a group of two families and their four young daughters, the youngest of whom was not even five years old. They were on a five day trip that included the Ediza-to-Minaret traverse, downclimbing the Class 3 slot and all. There is hope in the world after all, and I congratulated the parents accordingly.

After a fishing stop along the shore of Cecile for brookies, we descended a rowdy and loose scree gully to the east of the “Diagonal Traverse” along the normal Roper High Route, to the talus along Iceberg Lake’s southeast shore.

We stopped for a long time at Iceberg’s outlet to eat, drink, let the afternoon sun moderate a little, exchange stares with a curious coyote, and fish for the plentiful pan-sized brookies that inhabit this drainage.

In the early evening, we departed this idyllic spot and continued moseying along the High Route to the meadows above Ediza Lake and directly below Ritter Pass. In the incredible basin, surrounded by the Minarets along with the hulking masses of Mounts Ritter and Banner, we are encamped for the night.

The Minaret Winds returned this evening, but now from the north. The sunset sky was golden brown, accentuated by wildfire smoke blowing into our area. 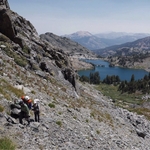 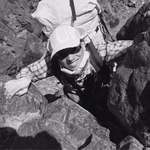 Processed with VSCOcam with b1 preset