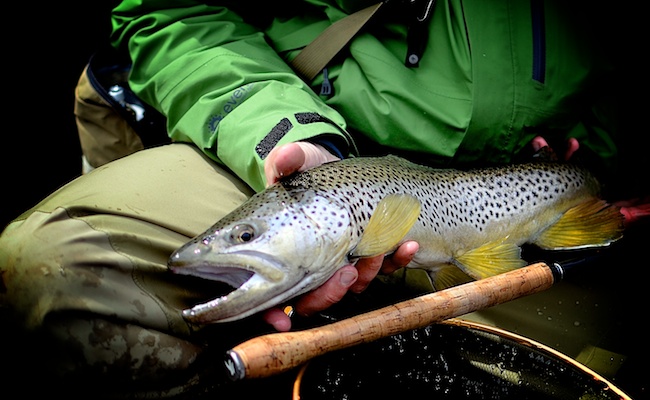 The big brown’s first aerial leap from the depths of the Madison River made me smile. The second one made me laugh. The third one, at the end of a run in strong current, reminded me that using tenkara gear and methods for big trout in big rivers is as applicable as the practice of small-stream tenkara.

If you’ve fished with me long enough, you’ll experience one or more of the following scenarios. 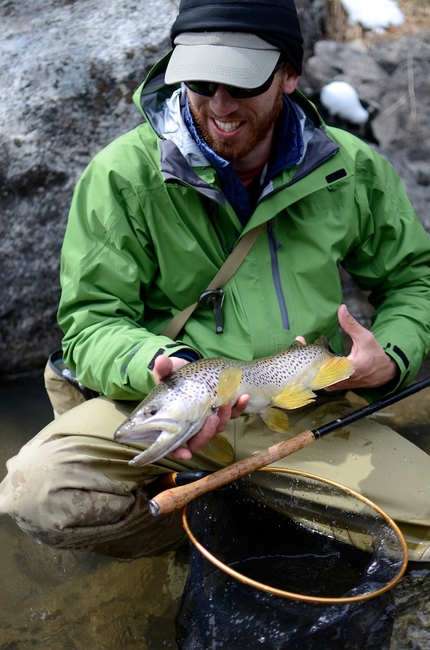 Daniel Galhardo, Tenkara USA Founder, with a large brown trout caught via Tenkara during a baetis hatch on the Madison River in Beartrap Canyon, Montana.

The Small Stream Myth of Tenkara

Certainly tenkara methods offer advantages over western (short-rod-and-reel-fly-fishing) methods on small streams, simply by its virtue of not having to deal with backcasting in brushy conditions and notwithstanding the fact that the $400 line holder you are carrying, with the accompanying weight of gear, is probably overkill.

But the real beauty of tenkara on small streams is being able to control the fly in turbulent water by keeping the line out of the current – one of the most difficult aspects of fishing small streams with western gear.

I think there are two reasons for this.

I can’t help you with #1 other than to say: put up or shut up. Get off the forums and go learn, and then practice tenkara.

And Tenkara USA can certainly help you with #2: enter stage left, the Amago, and say hello to big(ger) river tenkara fishing.

At 13’6″ with a 6:4 taper on the faster side of 6:4, the Amago has the length to manage a longer line on bigger water. It easily throws a 50 foot #5 level line, and you can manage the signature fly-first tenkara cast with #5’s up to 30 feet without difficulty, and only a little practice. You may need a netting partner when using lines longer than 20 feet. Precision casting (without wind) with the Amago is probably best with a #4 or #5 level line that is in the 20-24 foot range – in other words, you can get away with a slightly longer line than “1.5 times the length of the rod” with the Amago, due to its length and action. With wind, I recommend a shorter line in the 16-18 foot range.

In addition, the Amago has both the length and backbone to fight bigger fish. Of all the rods in their line, the Amago is probably best positioned to fish big water, and land trout bigger than 20 inches.

The Amago is the best we have right now from Tenkara USA, but it’s not a square answer to the question of how to land big trout in big water.

For every large (up to 24″) trout that I’ve landed on a tenkara rod, there have been two that escaped because the rod didn’t have the backbone required to steer them out of strong currents and prevent them from running. I recall two fish in particular: a South Fork Flathead River bull trout that was in the 28″+ range and fiery Missouri River rainbow (24″+). The bull trout dogged its way into a log jam and the rainbow screamed downstream in fast water. To be fair (to me!) both trout were hooked on the very soft (5:5) Ayu, which simply doesn’t have the steering power of the Amago.

I’m catching bigger fish on the Amago, but still losing the biggest ones. I’m confident that my fighting technique is improving, however, and more trophies are coming to the net.

My ideal big trout big water tenkara rod might have a 7:3 taper (8:2 would be too fast in windy conditions) and be in the range of 14 to 15 feet in length, with a long grip for cantilever double-handing when fighting large fish.

Oh, if I had a fly for every time I’ve heard this one from a shop clerk, “pro” angler, blogger, or other self-professed expert…

So let’s talk about the real limitations of tenkara methods:

I live, fish, and guide in Southwest Montana on big rivers like the Yellowstone, Madison, and Missouri – and am here to tell you that I’m a big-river-big-fish tenkara addict.

1. Tenkara allows you to deliver a fly-first and fly-only presentation.

The western angler, after a series of false casts to increase line length, will lay out a final cast across the current with delicacy and finesse – with the fly, leader, and line seemingly and softly falling onto the water at the same time that the final loop of leader and tippet unfurls in the distance.

This cast just spooked half the trout between you and the fly.

I cannot recall how many times I’ve seen a fly fishermen ignore, and then spook, every trout within easy reach of a tenkara cast, while casting long lines and then try to mend them in complicated currents.

A more skilled western angler will cast to close fish first, then to fish a little farther away, and finally, to the fish that require long casts. But what if fish are rising everywhere?

Tenkara allows you to pick and choose what fish you are casting to, regardless of where they are (except of course, for those ones that are very far away).

These two factors make for a deadly combination on spring creeks, but are even more important in big rivers. First, it allows you to more effectively respond to rising fish in front of you regardless of their position, rather than being forced to cast to the fish closest to you before casting to fish a little further away. Second, the fly first presentation allows you to precisely control the fly (see #2 below) with your rod tip, a much more effective and accurate strategy than mending line. 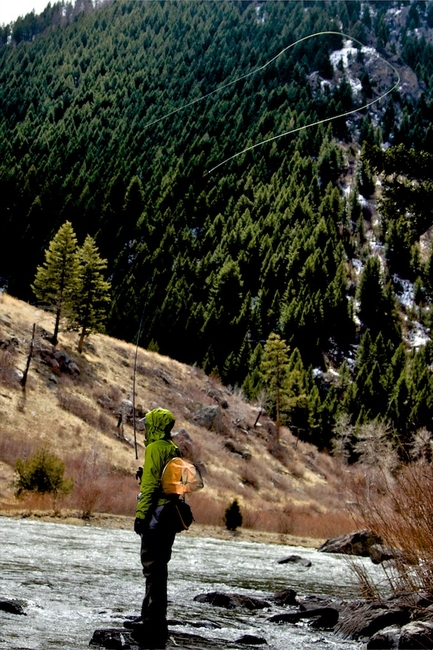 Ryan Jordan shows a tenkara backcast where the fly is casted "back and upward", staging for a fly-first delivery. Brian Flemming Photo.

It is because of these same casting physics that a fly-only presentation is effective with tenkara. Even with long lines (I sometimes use a level line up to 30 feet in length with the Amago), a long tenkara rod can effectively keep most of the line and leader off the water with little or no drag ever imparted to the fly. With 30 feet of double taper 4 weight line and a nine foot rod, this feat is nearly impossible with western style.

2. Tenkara allows you to control the fly.

The sensitivity of tenkara, combined with the rod length and short line, means that every cast is predictable.

The result is that I can regularly deliver a fly at the end of four feet of tippet attached to a 20 foot tenkara level line to a target three inches in diameter, repeatedly.

The ability to cast with precision to a pinpoint location – combined with the fly-first and fly-only presentation style of tenkara – means that you can employ one of the most effective fishing strategies to entice a trout to take your fly: the repeated delivery of a fly to a small area over and over again, at quick intervals (this makes the fish aware of surface activity), followed by one final presentation that allows the fly to travel through the entire feeding lane of the trout. Often, the result is a successful, and aggressive take. Using this method with western gear is difficult (because it’s less accurate unless you are a practiced casting champion) and risky (because the more you send highly visible conventional fly line over a stream, the more you risk spooking trout with the shadows, splashes, spray, and drag of the line).

In addition, because you can deliver a fly-only presentation where the fly is controlled directly with the rod tip, you have immense control over where that fly travels, and can precisely position it into just about any feeding lane. My favorite feeding lanes to fish with tenkara gear are far eddy lines, pockets beyond faster moving water, and the far seams of plunge pools on the opposite sides of rocks – three locations where fish love to feed, and three locations that give all western flycasters absolute fits of line drag.

3. Tenkara requires that you stalk the fish at closer distances.

If you think that you only have to stalk fish in streams and spring creeks, then it’s a sign that you’ve watched a River Runs Through It too many times, and that you’re a western line distance addict. Stalking fish is not the same as “seeing a rise on the other side of the river and casting to it.” Stalking fish may be the single most important skill required to catch big trout, and it’s not the same as “prospecting for big trout in obvious looking runs”.

You don’t have the ability to cast to a fish rising 70 feet away from you, across the river, if you fish tenkara. Thank goodness, because I’ve yet to see a western angler effectively manage that much line in a big river unless he’s stripping a streamer.

4. Tenkara allows you to control the position of an underwater fly around and over obstacles.

We’ve already discussed above how and why tenkara’s fly-only presentation allows you to control a dry fly. This presentation style offers significant benefits for wet fly / nymph fishing as well.

Big rivers have big obstacles. Underwater log jams, boulders, and other structure provide current breaks that allow a smorgasbord of trout food to accumulate. Managing the drift of an underwater fly around obstacles, and over them, is nearly impossible with western methods. With tenkara, it’s as easy as lifting, reaching, and pulling. Tenkara allows you to deliver an underwater fly with absolute precision, simply by moving your rod tip up (raises the fly up in the water column) and down (sinks the fly down), back (upstream, raises and slows) and forth (downstream, sinks and dead drifts), or fore (away from you, sinks or dead drifts the fly away) and aft (towards you, raises the fly towards you). Combinations of these movements can effect additional control over the fly. These movements in combination with river currents give you tremendous control in positioning wet flies – all without the aids of indicators and split shot.

5. When you hook a fish with a tenkara rod, you have more control over the fish – where it goes, what it does. 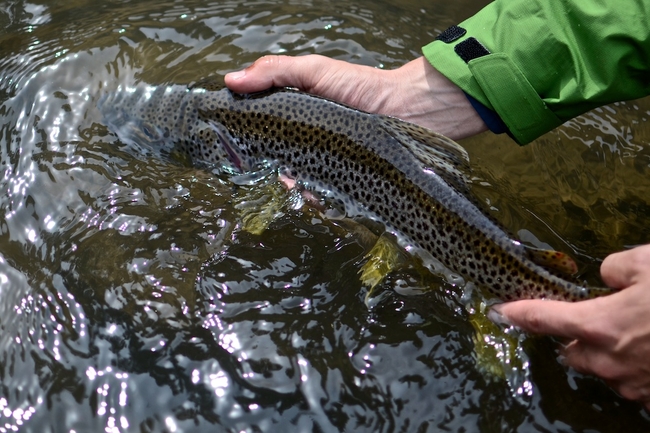 This big brown fell to a sakasi kebari style fly during a spring baetis hatch. Tenkara allowed the trout to be landed quickly - less than a few minutes - which improves recovery and survival when practicing catch-and-release.

The length and slower action of tenkara rods are more forgiving than western rods when it comes to your response time to a running trout. There is a common misconception that in order to land a big fish using tenkara methods, you have to be prepared to swim and chase it. Mostly, it’s hogwash, and landing large trout simply means that you have to follow the fish a few yards, but mostly, use the rod, its position and angle, and the river currents, to your advantage to tire the trout.

6. Tenkara is aesthetically beautiful to hold, to cast, to land fish.

I can write about what this feels like, or you can try it for yourself. Go fish tenkara. You don’t need me to fuel the emotional addiction to tenkara fishing.