Cliffhanging: Bear Bagging Above the Treeline 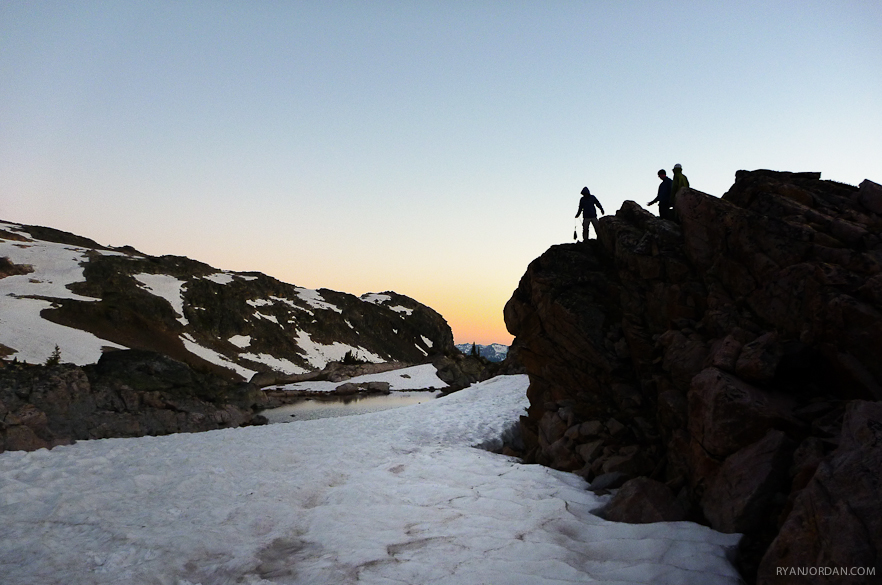 On the Arctic 1000, we slept with our food. This gave me a little bit of trepidation, especially when our camp was usually surrounded by some combination of wolves, muskox, and grizzly bears.

I’m sure that’s what Andy will be doing as well during his traverse of the Brooks Range this year. Otherwise, sleeping with your food is generally considered to be a black market activity not to be shared on the Internet. Wilderness food storage considerations are receiving renewed interest in light of recent grizzly bear attacks at a campground that was less than eight miles from where the above photograph was taken. (The attacks appeared to be unrelated to food storage policies but have resulted in a dramatic increase in bear frenzy.)

Bear canisters are required in some areas but for most of us up here in the northern Rockies, we make do with trees, which are generally plentiful.

Above the treeline, folks consider all sorts of haberdashery in addition to bear canisters in the name of weight savings. Some of these strategies include:

I’ve tried lots of other light methods, as well, including several layers of 12.5″ x 20″ O.P. Saks, which I might use if I were to sleep with my food…Three O.P.’s give me a bit of security on a longer walk, and when stashed inside a Blast Cuben Fiber stow bag, I don’t worry about rodents either, because they have a hard time chewing through the fibers.

However, I still sleep best when my food remains inaccessible to a bear (or goat), so I look for cliffs when I can.

The cliff should be at least 15 feet high, and ideally, vertical or overhanging. Your rope needs to have a little more beef than the thin cords used for hanging food in trees because it will suffer abrasion on sharp granite as you raise and lower the bag. My rope choice is AirCore Rope, which is tough enough.

The only methods I can heartily recommend for food storage in the Northern Rockies are tree hanging and bear canisters. Any other methods may be a compromise in safety, land management agency policy, and personal comfort. Use your head, and don’t let a goat (or bear) get your food.