The leading edge of the front moving into our area didn’t harbor much climatic energy and a few hazy stars were even revealed before I shut the shelter door and went to bed.

The breeze fizzled sometime later and I awoke to stuffy conditions in the middle of the night, prompting me to remove my down jacket and open the shelter door back up.

By dawn, temperatures had dropped significantly and I was back to wearing my down jacket until the wake up call.

The morning broke with calm weather, a glass-smooth lake surface, and a bit of blue sky.

By the time we left camp, the winds had returned, the blue sky went AWOL, dark clouds loomed on the northern horizon (the direction we were headed), and the cloud cover had descended low enough to swallow the summit of Fremont Peak.

We started trekking in the midst of booming thunder, lightning, and a torrential deluge of hail.

By the time we walked a mile, the sun was shining again so we took a break on a granite knoll below the west face of the south ridge of Peak 12476. Exchanging raingear for sunshine vastly improved morale as evidenced by the relaxation of conversation intensity. Sunshine always brings more laughter (there is a tipping point beyond which the weather becomes too foul to imagine that also induces laughter, but for different reasons).

We continued along a tundra-and-talus shelf on a NNW-ish bearing, through pleasant terrain via cols and tarns. As the heavens unleashed a cold slushy hail that had us scrambling to put on raingear again, we began our descent to Wall Lake down a gully choked with small talus, bog, and bush. While skirting Wall Lake’s northeastern shoreline, we cliffed out and opted for a route above the cliffs to avoid deep wading.

We spent the next little bit thus traversing smooth and wet granite slabs that plunged into the lake below, in the event of a slip. We made sure not to slip.

As the storm system abated and the sun began to peek out again, we arrived at the Pole Creek inlet at Wall Lake’s northern end. We are camped on a large peninsula here, near scenic cascades of Pole Creek, where water rushes dramatically over granite slabs as the creek plunges to the lake.

Today’s trek was an easy and pleasant off-trail stroll through Wind River high country – a good recovery day as we carefully conserve our energy while carrying heavy packs, and keeping us fresh for the hard terrain planned during the second half of our trek.

This afternoon, we dried gear in the sun while watching distant cumulus grow to the south of us.

We are are perched in one of the most scenic areas I’ve ever visited – the massive, canyon-rimmed Wall Lake spreads out to the south and the Harrower and Knife Point massifs cast shade on us from the north. These mountains loom two thousand feet above our camp.

After a hearty meal of the Crew’s special beefy-mac recipe, We cleaned the dinner dishes and tied the Ursacks to chockstones lodged into the gaps formed by granitic glacial remnants (very large boulders left behind by receding glaciers) setting on granite slabs (there are no “trees” here larger than a few inches in diameter). We announced the unspoken rule of expedition travel that if someone gets their food bag stolen, their cook group will redistribute remaining food into an equal share. This creates a system of peer accountability that ensures that the Ursacks are well-secured! It works particularly well with hungry teenagers.

As we finished our evening debrief and team meeting, the black clouds began their spitting routine and thunder booms to the northwest, where the thirteen-thousand-footers are – and where we are headed tomorrow.

And so we retire early to our shelters – I’m looking forward to falling asleep to the sound of raindrops on Cuben and the distant rumble of the Pole Creek cascades.

Photo: Aiden and Chase match maps to terrain to find the most efficient route through the Wind River’s maze of high benches, cols, and slides. 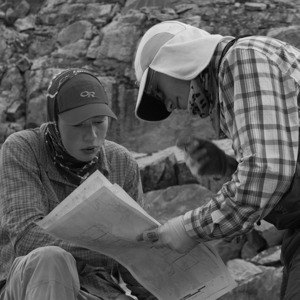