We embarked on our expedition from our hometown of Bozeman, Montana at eight o’clock this morning. After an eight hour drive with a lunch break at Bubba’s in Jackson, we arrived at Elkhart Park late this afternoon.

We squatted on a large parcel of gravel in the parking lot where we organized more than 150 pounds of group food, cook kits, water treatment chemicals, maps, shelters, crevasse rescue gear, and climbing gear. Rations were equalized and each member absorbed another 12 to 14 pounds of gear into their already bulging and burdensome packs.

Like mules, carrying loads ranging from 45 to 60 pounds, we starting hiking up the Pole Creek Trail at 6:00 PM.

The rocky trail grinds slowly upward for three miles before breaking out into a large meadow and giving us our first view of the Continental Divide and the magnificent, imposing, jagged summits that we’d be traversing beside in just a few more days.

We are already higher than 10,000 feet in elevation. Nobody is sucking too much wind yet, a good sign.

The air this evening has been still and a little muggy, ripe conditions for mosquitoes, which are out in numbers high enough to warrant hiking in a headnet.

After a few hours, 5.5 miles, and a thousand feet of climbing, we arrived at Upper Sweeney Lake, which sits in a shallow bowl on a high bench. We are camped on huckleberry carpets between granite remnants overlooking the lake’s eastern shoreline.

The temperatures have dropped enough to send the mosquitoes into dormancy (thank God for that) which will give the gang some reprieve in their floorless pyramid shelters.

Tomorrow we exit the trees and wind our way up into the “high country” towards the divide.

Godspeed,
RJ // Enjoy live dispatches and photos via satellite from this trip online at http://www.ryanjordan.com/windrivers2015/ and receive updates via @bigskyry at: 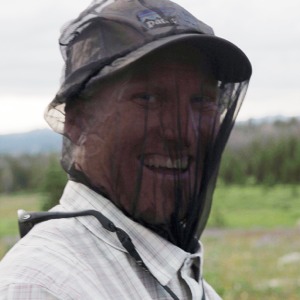