“To countless people the wilderness provides ultimate delight because it provides the thrills of jeopardy and beauty. It is the last stand for that glorious adventure into the physically unknown.” – Bob Marshall, Founder of the Wilderness Society

We left Bozeman this morning for a quick trip on the Gallatin Crest, near Windy Pass.

This area is confined inside the boundary of the Hyalite-Porcupine-Buffalo Horn Wilderness Study Area. That means it’s protected (sort of, at least in the short term) from motorized use and has the potential to be designated as Wilderness under the Wilderness Act of 1964.

On my last trip in what is now the HPBHWSA, I encountered motorbikes on the Gallatin Crest. I happened to be on a mountain bike at the time. Riding the Crest on an MTB was great. Seeing and hearing motorcycles on the Crest was not great. Now that I’m visiting this area again without intrusion of motorized or mechanized rides, I have to admit that I like it better without. Don’t get me wrong, I love mountain biking, especially in scenic locations, and I treasure the opportunity I had years ago to ride on the Crest, but I’m pretty sure I’m willing to give up the privilege (it’s hard to see this as my “right”) to ride in exchange for more designated Wilderness.

After a bumpy ride up the upper reaches of the rocky Portal Creek Road near Big Sky, we arrived at the trailhead and saddled up.

The trail came with a little bit of everything: mud, snow, icicles frozen on logs across the streams, bear tracks…

We arrived at the cabin and ate lunch before exploring the area under blue skies.

I followed an edge between forest and meadow through tundra and tussocks, springs and bogs. The fall grasses, devoid of the moisture and greenery of their summer state, crunched underfoot. A cold breeze, the occasional snow patch, and no more weekend crowds signaled the dawn of a new season up here.

Upon reaching the crest I tuned my long range vision to the skyline to the north, where a large tan mass was meandering three quarters of a mile away. Behind her, a smaller brown ball of fur sauntered along in sync. Mom had big shoulders and a confident swagger, and seemed to be intent upon getting to a stand of white bark pine a few hundred yards in front of her.

I returned to the cabin.

I made a pot of Jetboil coffee, snacked on black licorice, and fell asleep in the warmth of the afternoon sun, recovering from some very late nights of working this week.

I didn’t sleep long – maybe 20 minutes – but woke up to grasses turning golden in the late day light and the satisfaction that comes with seeing a couple of high school kids unwind and cast off the stress that comes with intense schedules dominated by school and extracurricular activities. It’s a joy to see the Wild do its work like only the Wild can do.

Two more joined our party in the evening and we enjoyed the camaraderie of cooking dinner and eating together, talking about the animals that hang out in this area, and watching the sun set over the Madison Range to the west.

We retired into the cabin to escape the very un-summer-like temperature drop that came with the setting sun, fired up the wood stove, and played hearts until the faint orange hue of the Milky Way replaced the purple horizon of dusk.

I bundled up and retired to my tarp pitched 50 yards away. In minutes the cabin become eerily dark and quiet. Rest came easy to these guys tonight, and I can no longer keep my own eyes open.

Tomorrow we’ll head up and explore the Crest before returning home in the afternoon. 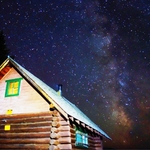 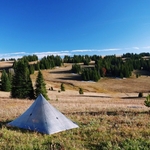 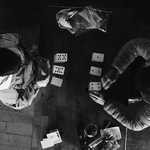 ← Gallatin Crest, Day 0 – Developing a Tolerance for Uncertainty
Staging for the Smith River →