Last night I stealth camped, cowboy style in my bivy sack, under pines in the forest above the river and behind our camp. I packed up before sunrise, and walked down to the river to meet the others. En route, I passed through a layer of Katabatic air that signaled a cool, damp night on the river bank. This morning the cowboy campers down on the river have sleeping bags soaked with dew.

A morning fire cut the chill and coffee warmed my belly. It’s hard to muster enthusiasm for getting into cold water and sitting in a wet boat when it’s 45 degrees and shady. We took our first stroke just as the morning sun kissed the water in the canyon.

Below Syringa the Smith River canyon becomes a sight to behold. Limestone cliffs hundreds of feet tall reflect the soft morning light and create a yellow- and orange-tinted amphitheater for the packrafter.

We paddled more than seven miles on our first run of the day, passing the dark, cold, and aptly-named Canyon Depth Camp before a few miles of blistering hot sun, stopping for a rest at Cow Coulee. There, I ate and napped for 10 minutes in the shade.

We paddled past Sunset Cliffs (so named for their deep orange coloration) and took a brief break at County Line to stretch and swim.

Then, after another three miles, while paddling by shady alcoves created by overhanging cliffs, I spied a small but happily frolicking cinnamon bear swimming in a deep pool under one of the alcoves 30 yards downstream of me. It was turning over, dunking its head, and playfully enjoying a midday swim to escape the heat above.

It didn’t notice us until we were pretty close, at which point we pulled over on river right at Bear Gulch (go figure) and it swam downstream, exiting the alcove river left and lumbering ashore and up the hillside to the shade of large ponderosas.

After eating some lunch of wild smoked salmon and cream cheese on hardtack, and wondering if this would be a good time of day to use the nearby latrine, I noticed a bigger bear emerging from the ponderosa grove, and it not so bashfully sauntered downslope to check us out, perhaps enjoying the scent of wild salmon…

At one point, she stood on her hind legs and decided to jog along the shore downstream. This of course brought us great relief.

Until she took a sharp right turn and entered the water just below where we were sitting. I then glanced up the hill from where she came and noticed more movement. The cub peeked its head from behind the biggest pine, just to see what was going on.

At this point, I figured that the sow was either intent on letting us know not to mess with her swimming cub again, hungry for my salmon, or confused about the rules governing bear-packrafter interactions. Aren’t bears supposed to just run away?

When she finally made it across the river, she glanced over at us once and then disappeared upslope into the bushes…leading to the latrine.

I would have to wait.

We arrived at our camp at the Crow’s Foot around 4pm and met a party of fishermen from Great Falls wading the river there. They had seen the same lone canoeist we saw yesterday, and noted that another canoeing party was a day ahead of us. Other than that, we seemed to be alone out here and have seen no other floaters.

To have solitude on the Smith River with terrific weather and strong flows is almost unheard of. We rolled lucky sevens this weekend.

The Crow’s Foot camp sits on the inside of a large riverbend with a willow and cottonwood bottom, expansive grass meadow above it, flanked by steep forested slopes. The outside of the bend is framed by giant cliffs that reflect their beauty at sunset.

The camp is mostly pleasant save for some cows in the distance that sound a bit agitated, and it offers a fine viewscape with plenty of firewood.

I’m in my bivy sack under the canopy of an ancient juniper about 25 yards from the river and can hear its soothing course, as the Smith does its magic to become a little part of me.

Photo: In the depths of the Smith River Canyon below Syringa.

// Enjoy live dispatches and photos via satellite from this trip online at http://www.ryanjordan.com/smithriver2014 and receive updates via @bigskyry at: 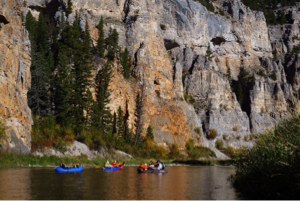