Running a river with a large group (we have 9) requires the presence of eddies that are able to accommodate the entire group if we are to “boat scout” the river (the process of river running where scouting is done from real time in the boat). This is how rivers are run quickly. We don’t have that luxury for a number of reasons – crew size, the presence of less experienced paddlers, flooded riverbanks, and the need to teach paddling skills when opportunity arises.

We are running two boat groups. The front group is led by either myself or Eric. The front group has two additional youth and one trailing adult. We run the river pretty much in single file with spacing of about 10 to 30 yards between boats. This is the scouting group … the decision-makers … the guinea pigs.

The rear group (adult lead and cleanup, with three youth in the middle) trail the front group by 50 yards or more, typically.

So that’s sort of how we roll.

Today, we paddled 12+ miles of the S Fk Flathead to its confluence with the White River, where we are camped at Murphy Flat (or…what’s left of it…more on that later).

The characteristic feature of the day: whitewater! With high flows, the rapids complex between the Big Prairie pack bridge and Burnt Prairie change character, so some of what we might normally boat scout at low water we scout more cautiously on foot from the river banks at these flows.

We ran all the rapids. Most of them were Class II+ and we snuck through another that would go III- on many boater’s scales.

It was a load of fun and we got really wet, frequently dumping water from our boats.

That said, the S Fk Flathead is almost entirely runnable between the Big Prairie logjam(s!) and the White River.

During my trip in 2009, the only problematic feature between Burnt Prairie and The White was a sweeper/partial logjam river right just upstream of the confluence. Now, things have changed. The river has carved an entirely new channel above the confluence (we didn’t go down that one due to its flooded banks and blind corners, but I have a feeling that it’s the new main channel…) and the river left channel (the old channel) is blocked by single sweeper pinned between two logjams. We took that channel, and portaged.

Upon reaching White River Park, drama of past and current flooding reveals itself in the form of a new main river channel, and braided side channels filled with new islands carved from old mainland. This is ponderosa pine country, so the re-reouting of the river evicts some of these massive forest citizens (some who have fallen there only a few weeks ago) and they lie prone in the river. Paddling between these dying denizens in a fast moving side channel is a bit spooky.

After scouting for a campsite at White River Park, we decided to move on and scout river left at Murphy Park. My memory of a plush outfitter camp where I stayed five years ago had been displaced by a maze of mud, side channels, and wood. After only one sweeper portage, we finally worked our way down to a streamside camp in sparse ponderosas that we were happy to call home for the night.

The photo shows a view from our campfire area, looking out to grass and trees – with river infiltrating them.

Today was harder than any of us expected. We had to stay on our toes and approach every blind bend with caution. High flows and first tracks after a big snow year have their price, I suppose.

This was another day that reinforces the idea for these teenagers (and us!) that we are on a big expedition in a Wild Place.

We have now traveled about 40 miles and have another 65 to 70 remaining.

We hope to make it to the Black Bear Pack Bridge tomorrow night, where we’ll end our run on the South Fork Flathead and begin a 4 to 5 trekking leg up to and along the Continental Divide.

Enjoy live dispatches and photos via satellite from this expedition online at http://www.ryanjordan.com/ and receive updates from Twitter via @bigskyry (http://www.twitter.com/bigskyry). 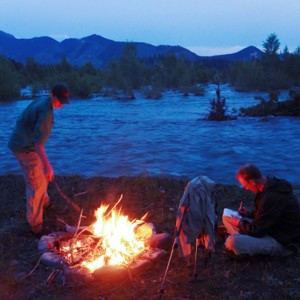