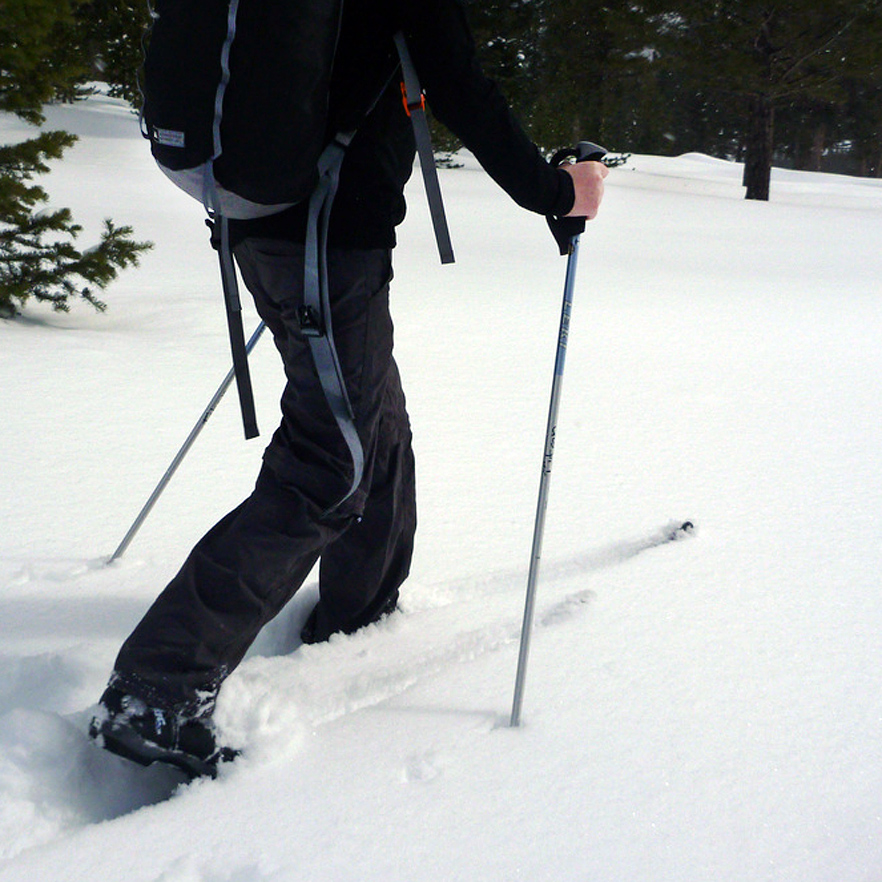 Climbers and fishermen seem predisposed to becoming philosophers, driving their daily lives between guide lines emblazoned in their brain chemistry from epic memories.

“Thanks for the belay on that project deadline, man.”

“Watch your presentation, she’s pretty spooky this time of day.”

But skiers keep it simple.

To a skier, it’s not about the temperature, or the wind, or the weather, or the humidity, or even the location.

It’s all about the snow underfoot.

That snow can be distilled into three primary forms: tracks, crud, and powder. Everything else is just some combination of, or varying degrees of, these three.

Last week I skied a day of trails at Lone Mountain Ranch, a cross-country Disneyland near Big Sky. Skiing in someone else’s tracks is easy. Skiing in tracks made by a groomer is downright blissful. None of us are going to ignore a perfect set of tracks if they lead to where we want to go, right?

Maybe that’s the problem. They lead where someone else has decided they should go. Have you had an appraisal on your house recently? Half of Americans my age are underwater on their mortgages. How did we get here? We can’t really blame anybody. We just skied the tracks.

I suppose it would be pretty foolish to think that we can ski the same tracks as everyone else and expect them to lead us on a journey that was anything different than the same place as the poor fools before us. Isn’t our battle cry for government to help fix the financial crisis, get our IRA’s and appraisals where they used to be, so we can get back on the tracks and continue what we were doing? Seriously?

I reckon this is how I spent the first forty years of my life because it’s rather hard believing that everyone else is going the wrong way when they at least are looking happy doing it. “Works for them…so…”

I’ve learned that tracks go nowhere useful. They either dead end or deliver you back to where you started.

The hard part about leaving the track is that you leave a lot of friends and family, and that separation is painful. You also find out who really loves you, and that’s beautiful.

It’s the agonizing walk through tussocks, talus, laurel, icefalls, slide alder, and sastrugi that make us yearn for tracks.

We don’t always choose to go through crud, but we usually know it’s coming. It’s always coming. It’s as reliable as a Madison River caddis hatch on a warm summer’s eve.

What’s surprising is how much we complain about it, even though (a) we’ve mostly done it before, (b) we knew we were getting into it, and (c) we know we’ll do it again.

Nobody wants to follow you through crud, and you’re always looking for a way around it. Mostly, the way around it is too long and arduous and it doesn’t seem worth it.

Crud isn’t bad, it’s just part of the package if you want to go from tracks to powder. Unfortunately, most people step one foot into the crud, hang out there long enough to get a severe distaste for it, then turn around to the tracks. After a while, they repeat this cycle.

My version of crud right now is the hard work involved in life- and work-style reengineering, which involves ignoring the expectations of well-meaning people who have good advice but actively live their lives in tracks with predictable and cyclical forays into crud. My plan: plow through the crud. I want to know what the other side looks like.

I’m not there yet by a long shot. But I really like stepping out of the tracks and experiencing hope that lies on the other side. And some days, the crud is so bloody hard, it’s pretty fun, just because it’s different.

Twenty two years ago I skied 12 miles of powder in a whiteout on an icefield in the Canadian Rockies.

It was a life-changing experience because I had nothing but my own thoughts to distract me. During those 12 miles, I consciously made decisions about college, relationships, and career that would permanently alter the course of my life. I also solved differential equations, wrote a poem, and counted to five thousand. I invented a silly test that allows me to assess snow density on a numerical scale that I still use almost every time I ski. OK, so some of these things were big, and some of these things were not so big.

But when’s the last time you spent 12 miles (6 hours) doing anything but letting your mind create, solve, and grow?

This is the allure of powder, and what it’s like to focus only on the immediate sensation you are feeling beneath your feet.

I’m fortunate to live in a town where there are lots of powder days in the mountains. I’m more fortunate to have experienced dramatic and meaningful moments borne of simplifying, and minimalizing, my life over the past two years. I yearn daily for whiteouts that allow me to focus, and block out everything else.

I’ve only just begun, but seeking simplicity in my health, finances, time, and obligations comes with the hope and promise of skiing powder every day —

— and turning around from where you came, and smiling at art — figure eights weaving their way down the mountainside — rather than groaning because you just did a potato-sack dance in a circle and ended up right where you started.