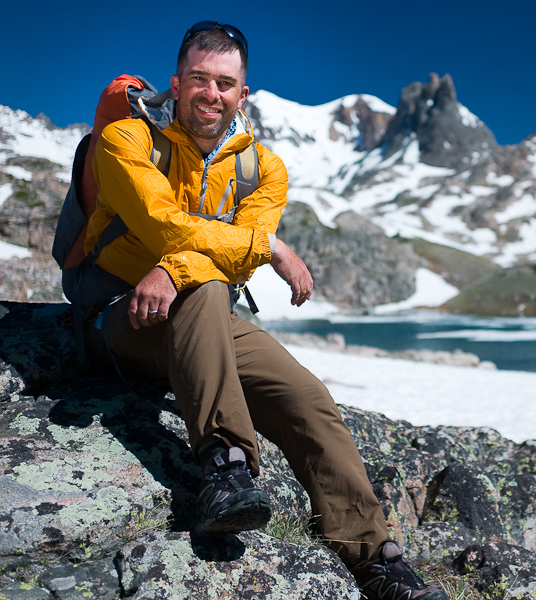 Ryan Jordan is the founder of Backpacking Light and a professional guide (wilderness trekking, packrafting, and tenkara fly fishing), a consultant in the areas of organizational development and product/service life cycle engineering, and an active writer and speaker.

Q: What happens when you mix a radically simple ultralight travel style while visiting a Wild Place?

A: You achieve the freedom to Explore Your Wild Side.

I started backcountry guiding as a profession in 1989.

In those days, I’d simply rifle through clients’ packs and yank out the stuff I didn’t think they needed, because I wanted them to go light. Sometimes they would sneak it back in when I wasn’t looking. Then, while they were asleep the night before we’d leave, I’d secretly pull it all back out.

This provided a good foundation for client distress and huge epics on our expeditions because I wanted them to know that surviving a Wild Place with hardly any gear was mostly a mental exercise that they needed to know if they were going to be a useful contributor to society.

I didn’t earn a lot of gratuities back then, and didn’t get a lot of repeat business.

Today, I’m older and wiser, having helped and worked with thousands of outdoor recreation enthusiasts, educators, and expeditions who want to enjoy wilderness travel in ultralight style.

My passion for serving clients is to teach you wisely, train you well, and empower you to Explore Your Wild Side*.

(*without having to drink your pee.)

In 1981, I became a Boy Scout, made my own headlamp, and read Shackleton under the covers. Within the next seven years, I was an Eagle Scout and proud owner of a pair of Chouinard wood handled ice tools, a Pieps, and a packraft, and I had no idea how to use any of it, so I just sort of figured it out while my friends, and Scoutmaster, watched in horror. I married Stephanie in 1992, which is when I started reading instruction manuals.

By the time the late 1980s rolled around, I was deeply addicted to traveling long distances without resupply with very light packs. Circumnavigations of the Olympic Mountains and North Cascades, usually combined with a duct-taped Army packraft and a fly rod, with a healthy dose of reckless youth, seemed to be all the right ingredients for epic adventures. During this time, I did a lot of exploring, ran out of food often, swam rivers a lot, repaired my packraft a lot, and caught less fish than I thought I would. But I was so wildly engaged with what I was doing, that I wanted to share these experiences with others, so I became a guide.

Then – the usual story. I went to college, got married, stayed in college, had children, went to more college, graduated, got a salaried job with benefits and the promise of tenure at the college, acquired a mortgage, and like you, woke up wondering what had happened.

So, I exited academia, started several businesses, succeeded beautifully at one, – and renewed my passion for guiding, teaching, writing, and serving others – and Exploring My Wild Side.

Now, I live in Bozeman Montana with my beautiful wife and passionate son – with some of the world’s finest opportunities for trekking, packrafting, and fly fishing – right out my back door.

1981 – Became a Boy Scout and read Shackleton under the covers with a home made headlamp after I was sure my parents were asleep. It all went downhill from here, and my life destiny was established.

1986 – Became an Eagle Scout. Purchased a set of vintage Chouinard wood handled ice tools and an avalanche transceiver, and skipped a little bit of school trying to figure out how to use them.

1988 – Purchased an army-issue survival packraft and made several crossings of Washington’s Olympic Mountains, with descents of the Hoh, Quinault, Sole Duc, Bogachiel, Queets, and Dosewallips Rivers, all via either the summits of Mt. Anderson or Mt. Olympus. Got funny looks from other climbers with a kayak paddle on glacier climbs. All trips involved some variety of near death experiences, and a lot of swimming.

1989 – Completed my first major mountain trek without resupply – a 300 mile circumnavigation of the Olympics. The fishing was terrible, it rained a lot, and I suffered through various stages of hypothermia and starvation en route.

1990 – Complete my first 48 hour continuous trek without sleep – a 60 mile traverse of the Olympics that included a nighttime crossing of the Bailey Traverse. Hallucinated, and discovered that paths to enlightenment can be accomplished drug free. Fell in love with a girl.

1991 – After years of agnosticism, decided that Creation had fewer holes in it than Evolution, and offered better answers to the weird questions that meant the most to me, including anything related to avalanches, the salmonfly hatch, and love. Dedicated my life to serving Christ, and secretly hoped that a direct line to The Belayer would come in handy during storms, getting lost, being an entrepreneur, and other epics.

1992 – I married the girl, Stephanie, on September 5. I definitely got the better end of the bargain.

1993 – Graduated from Washington State with a B.S. in Civil Engineering. Too scared to work. Applied to graduate school. Accepted.

1995 – Graduated from Washington State with an M.S. in Environmental Engineering. Too scared to work. Applied to more graduate schools. We drove through the night from Eastern Washington to Bozeman to check out Montana State University for a Ph.D. program. We stayed at the Blue Sky Motel. I woke up the next morning, saw the Bridger Mountains, and decided then that we were staying, and that there was no further research to be done. Mariners went to the playoffs, the salmonfly hatch was incredible, and I thwarted joining the U.S. workforce. Life was good.

1999 – Finished collecting degrees from the American University System with a Ph.D. in Biofilm Engineering from Montana State University. Didn’t receive my diploma, because of unpaid parking tickets.

2000 – First of several trips into the Yellowstone Thorofare, the remotest region in the Lower 48.

2001 – Founded a tiny website called backpackinglight.com in my spare time because I wanted to write product reviews that protected consumers from buying crappy gear manufactured by U.S. outdoor gear companies. Caught a 23.5″ Yellowstone Cutthroat in Frenchy’s Meadow on a vintage Japanese-made 11-foot bamboo fly rod with no guides or reel, but had no clue at the time what tenkara was, or meant.

2002 – Stephanie gave birth to Rylee, our stillborn daughter, and I woke up to the realization that I learned nothing that could prepare me for this, after spending 20 years collecting good grades and paper certificates in the American public education system.

2003 – I resigned my position as a university researcher just in time to avoid getting sucked down the tenure toilet bowl and being forced to join a union. Started the Backpacking Light Fulfillment Operations Center in my garage, and started working side by side with Stephanie. We wore pajamas. Enjoyed a 58-hour day without sleep (more drug-free hallucinations, and those prayers I was hoping would come in handy — they worked!) on a stormy alpine climb in the Tetons, then ate breakfast at Jedediah’s House of Sourdough, took a nap, and went trekking for another week along the Teton High Route.

2006 – Shattered my ankle in a fall through shelf ice while on a trek across the Alaskan Arctic. Walked another 80 miles on it to a gravel bar where a bush pilot could pick me up. Enjoyed lots of surgery and rehab for the next few years.

2008 – Hired five new employees and an “operations consultant”, then sold 35% of Backpacking Light to an outside investor/partner, some of the more reckless decisions I’ve ever made. Fired the consultant in August. Enjoyed watching a press conference at midnight out in front of the Lehman Bros. building in NYC in September. Immediately went back to my hotel room and cashed out all of my stock-infested IRA’s, then spent the next day at Yankee Stadium watching Jeter and company slaughter the Devil Rays, while Lehman and company slaughtered Wall Street.

2009 – Suffered through Backpacking Light’s worst financial year ever, laid off most of the employees, cut most of the expenses, and laid low. Joined the Montana BSA team as the Council High Adventure Committee Chair in case I needed a volunteer fallback if I lost my job, my company, and my dignity.

2010 – Stockpiled cash. Cut spending more. Bought back all outstanding stock in Backpacking Light, one of the smarter decisions I ever made. Turned 40 – I didn’t have a say in this one. Convinced myself (by talking into a mirror, mainly, a trick I learned in Cool Runnings) that being 40 means little, so I renewed my passion for Exploring My Wild Side. Accepted the position as the Scoutmaster of Boy Scout Troop 676 in Bozeman, Montana. Trained our crew of Scouts how to go light, then followed them across the snow and talus of the Beartooth Plateau en route to their first 50-Miler Award.

2011 – Paid my parking tickets and received my Ph.D. diploma in a manila envelope, which I promptly lost somewhere while moving my office before I had the chance to open it. Clients started asking me to take my blogging more seriously. Here I am, still trying to figure out what that means.

2012 – Refocusing efforts as a family on simplifying our finances, possessions, and time. Discovered with no shortage of drama that we somehow have a high schooler in the home now. Celebrated 20th wedding anniversary with my best friend on top of a high peak in Utah’s Wasatch Range. Spending my 17th year in Montana. It’s home for me, in a very important way. I love Montana. Come take a trip with me out here, you’ll love it too.